Day 1: The Goal and Reason to Climb 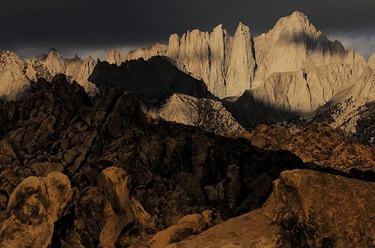 Some of you may have already known this since I’ve spoken offline about it for close to a year.  I just didn’t know when I’d do it or how to train for it.  All of that has changed.  In fact hiking it isn’t the end-goal.  I will hike the West face in the Summer of 2012 as a single or overnight trip.  That’s 21 miles round-trip.  I will then climb the East face, the climbing face of Mt. Whitney,  in the Summer of the following year.

Why Do It?
So, why the heck would I want to do this?

Many years ago my wife pointed out something I hadn’t realized about myself: I have dulled senses.  You see, I love spicy food and individual sports, and I like trying the boundaries when playing.  That doesn’t necessarily mean I’m the best at them, but I like to push my physical and mental comfort boundaries.

But how does this get translated into dulled senses? My wife found an article that described people that seek extreme sports, foods, and lifestyles have dulled senses.  They seek the extremes to push their senses into “feeling” something or experiencing the reality of life.  In other words, since their senses are dulled, they’re always in search of a way to sense the world around them more.  For these numbed individuals, seeking the extreme is no different than a person with sharply tuned and sensitive senses leading their life experiencing everyday phenomena.

For example, I’ve now mountain-biked, played racquetball, snowboarded and sustained injuries from each.  The injuries only made me want to go back.  As much as I didn’t enjoy the pains, in each case they reminded my how alive I was.  Heck, I’m the guy who gets a thrill from turbulence when some folks are scrambling for the vomit bag!!!

When I was considering what new thing to do next, I thought of parachuting, bungee 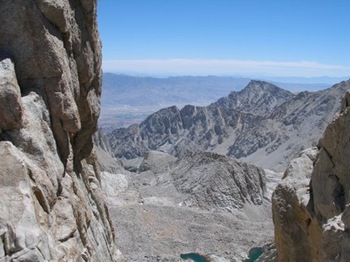 jumping, snowboarding big mountains (not resorts) among other adventures.  Then I heard Chapman University President Jim Doti talk about his mountain climbing experiences.  He has climbed or hiked mountains on various continents, including Antarctica.  He mentioned that Mount Whitney, right here in California, is the highest mountain in the lower 48 United States.  He talked about his experience climbing it, as well as how the lessons on the mountain applied to his daily life and leadership at the University.

…And the light bulb went off.  My next adventure was going to be hiking and climbing high elevations.  The first mountain on the list, and a test of whether I’m up to the challenge, will be Mount Whitney.

Some Facts About the Mountain
When I began my research , I realized there was a lot I didn’t know about our local Mount Whitney.  Here are some very interesting fact:

I originally thought I could just show up and hike this mountain.  Apparently not.  You need a permit from the Eastern Sierra Eastern Agency.  What’s more, you can only apply for a permit between February 1 and March 1 of each year.  Once you apply, your application is thrown into a pile and stirred.  During the selection, a lottery, you’re assigned advance reservations (15 per group maximum). There are only 100 day use and 60 overnight use permits issued daily. With the mountain being a popular hiking and climbing location worldwide, you can imagine how difficult it may be to get a permit.

All of this only makes the adventure just that…an adventure and one that certainly has my full attention and respect.

What’s Next?
Given the timeline and that I’ve never seriously hiked any more than 10 miles in high elevation (Lake George in Mammoth area at about 10,000 ft.), I need to train for my hike next year.  I’ve also NEVER climbed a mountain, with a few exceptions of small hills in Death Valley in my late ‘teens and some other unknown hills in Iran when I was a kid.

So, the next step is training.  My first focus is the hike in 2012.  I will complete increasingly difficult hikes each week, at least twice per week.  I started today with a  3.5 mile hike in my local neighborhood.  I’ve done this enough times walking our dogs, but I’m adding a backpack with water and some equipment to make it more challenging.

I’ll continue to add weight to my day-pack until I get to the weight I’ll be carrying on my day-trip hike at Mount Whitney.  I’ll also increase the total daily mileage every three weeks by a mile.  This’ll put me at a 20 mile hike in 50 weeks.  Once I hit 10 miles, I’ll also change terrain.  I’ll begin climbing the local hills, then mountains so that the last two months of climbs will be at the local mountains with peaks above 10,000 ft.  This is to insure I have the proper musculature, aerobic and elevation conditioning for the final climb.

I’ll chronicle my adventures here.  I hope to be able to not only share my stories, but also get your thoughts on how I can insure my success.  I’ll post my progress after each training day under this newly created category, Climbing Mount Whitney.  Each post will have the number of days since start of the training, with the aim of chronicling the ascent in both 2012 and 2013.

The only thing I’m missing are partners.  I’m looking for folks with similar goals that are up to the challenge and interested to share the experience.

Have you climbed Mount Whitney?  Do you have any tips on how I should approach my adventure?  Feel free to share you comments below.