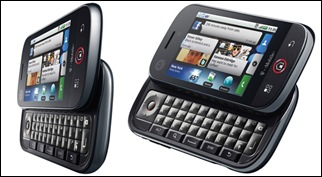 It’s been almost three months since I wrote about the Motorola CLIQ.  I’ve so far written four reviews of this device.  You’ll find the links for them all below, under the Related Posts section.

Since the most recent review in January, I’ve had the pleasure of using many more applications on the CLIQ, as well as had some challenges with the device.  First note is that Motorola introduced an updated Moto Blur v1.3.18 recently that, per company reports, provides the following:

Better Audio Routing
Repairs audio routing to prevent spontaneous speakerphone activations during calls and the random occurrence of music playback through the earpiece instead of appropriate external speakers.

Listen to visual voicemail over Bluetooth.

I’ve noticed most of these are true.  However, my Google email is simply not as responsive and, at times, painfully slow to use.  Bluetooth has improved dramatically, especially when making calls from my car’s Bluetooth.

After searching through the Motorola Support site, I also found that many people have an issue with their devices crashing after the update installs.  Suffice it to note that the Motorola team has been responding to individuals with these issues on a case by case basis.  At least that’s how it seems based on responses from them posted on this same site.

There’s also an issue with incorrect time display.  This latter I noticed on my device as well.  The phone clock was slow by about 7 minutes.  Unlike many others, mine worked fine after I reset the device by taking out the battery and restarting it.

All of this reminds me of Windows 3.  I remember how excited I was to get out of the DOS world and into a graphical user interface.  However, I also remember the pain of using a product that was at its infancy and full of bugs that resulted in numerous system crashes, incompatible device drivers, software applications that only sometimes worked as they should, and endless memory leaks.  I can’t speak to purely Android as I know the Moto Blur is an overlay to it, but I can tell you the pains are very similar.

However, the excitement is the same too.  For every time I have an issue, I can name half a dozen other times when I’ve loved my Smartphone.  I can easily access the web.  I use my phone as a broadband modem when I’m at a location where the wireless is maxed out or at a location with no broadband.  I simply tether it via USB to my notebook and use PDANet to “dial-up” a connection.  I’ve even used my notebook and tethered phone as a passenger in a car while commuting to a client site.

I’ve mentioned this before too, the applications is what sells these devices.  I use Calorie Counter by Fat Secret to keep track of my daily meal intake and help keep me on track with my nutrition goals.  I’ve used CardioTrainer with its GPS tracking to calculate my calories burned, distance and path travelled when I go for my evening walks.  When the standard Alarm application didn’t cut it, I downloaded Math Alarm clock that forces me to solve a math problem before the alarm can be shut off. Brilliant!  Meebo IM keeps me connected with my professional network when I’m on the road without my notebook, in a meeting, and in need of some answers. TimeDroid helps me connect to Freshbooks and track my billable hours, making client invoicing a breeze.  When in need of some mental stimulation, I turn to Mother TED to watch a recorded video at surprisingly high resolution from one of the TED talks.

I could go on, but you get what I’m telling you.  There’s a lot to love about Android and the applications available on the Android Market.  In the end, I don’t mind being the guinea pig in helping the OS, and its variants of supporting hardware, mature into the natural end product that will likely help us fully realize the Star Trek writers’ fantasy: a universal Communicator / Tricorder combo that does far more than what even those writers could’ve  imagined!

What Do You Think

Photo Credits: All photos are the property of Motorola