Stand Together or Die

My father-in-law told me a very good story this past weekend that I’d like to share with you.  It’s about a king and his five sons.

You see, the king’s sons were very competitive.  So much so that as they grew older and began to command armies, they began to boast about how each one was more powerful than the other.  The constant rivalry could only mean the eventual unraveling of the country as it would fall into a civil war aimed to determine who would be the next king.

So, their father decided to talk them through what strength they had, in the hopes of keeping the country from complete chaos.  He called them all to visit him. 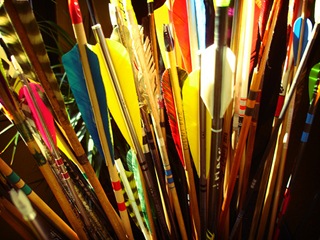 When they arrived, the brothers noticed the multitude of arrows sitting at the king’s side.  They were curious, and somewhat disconcerted at what was coming next. After all, their father was known for his bravery on the field .

As his sons came close, the king greeted them and spoke about how he wished his sons would put away their rivalry to realize their true power.  He took out an arrow and explained how a single arrow, a deadly weapon in the right hands, could easily be broken. He bent the arrow in half, and its shattered shards scattered before the brothers.

The king went on and picked another arrow sturdier than the previous, with a shaft and tip that would render any enemy dead once it had pierced through skin and bones.  This too he bent, though with some might, and broke in half.

He then picked five ordinary arrows, none more sturdy than the other and certainly less sturdy than the last he’d shattered.  He held their shafts together, took two leather thongs and wrapped them each around opposing ends of the shafts to make a single element with multiple tips and flys. He tried to bend these in half to break them with no luck.

He asked each of his sons to try to break the bound arrows.  None could do it.

That was the lesson: each arrow by itself could be broken with the right amount of brute force, but five arrows bound together, acting as one unit, were immediately unbreakable.  As the bound arrows could the brothers become.  Each on his own may have some strength, but alone they could each be broken.  Together, they were impervious to any brute force attack.

Not a bad story, eh?

What Do You Think

This is a conversation, not a lecture.  Feel free to comment below. I promise to respond to you in a very short time, usually within a day.