What My Dog Taught me About Team Motivation 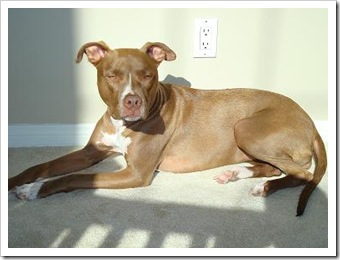 It may seem odd that I choose to talk about what my dog’s taught me, especially if I’m referring to lessons that apply to business, but bear with me.

I’ve owned dogs for a good portion of my life.  I grew up having anywhere from one to seven dogs up until the age of 12.  I’ve been away from dogs and had more cats since then.  When we owned dogs I’d seen how my father treated them (very kindly) and how the dogs knew by instinct that he was the “pack leader.”

I recently had to revisit the whole notion of owning a dog.  When my family and I brought home an eight month old pit bull from the shelter early this year, we signed up for a dog training class to insure she was well behaved.  The trainer used classic conditioning, meaning negative reinforcement.  I’d seen how his dogs reacted around him: they were very obedient and well behaved.  So, I thought nothing of his technique.

In fact, our dog spent eight weeks in the class and did well learning the basic commands.  As the weeks and months passed and our dog began to mature, we noticed she was ignoring our commands more often.  My wife recommended we try “Clicker” training classes.  At first I was hesitant.  I’d heard about and seen clicker training on the Animal Channel.  It was the antithesis of the classic training.  It focused on using ONLY positive reinforcement.  The process took longer, but the dog or cat learned the skills and kept them for a longer period.  What’s more, the animals seem to really enjoy the process.

I went to a local class with much hesitation and doubt, but I’ll tell you that after our four-hour session I was a changed man.  I’ve become a complete believer in the system.  Our dog has begun enthusiastically and attentively executing our commands.  She’s very responsive during and outside of the training sessions we hold at home and at the park.

This made me think whether pure positive reinforcement would work to motivate at work.  After all, we’re all creatures that enjoy a pat on the pack, a fatter check, or a public praise.

So, what’s the moral of the story? Reinforce the behavior you want through positive rewards and, where possible, avoid negative reinforcement.

I know you may be concerned that people will take advantage of you.  After all, if there are no negative consequences to actions, wouldn’t you end up with unmotivated coworkers or, worse yet, a free-rider problem?

That’s a good point and one I’ll address in next week’s blog under Business Strategies.

I’d love to hear what you learned about business from an unlikely place.  Feel free to share your stories below.