The Most Reliable Note-Taking Tech…The Notepad! 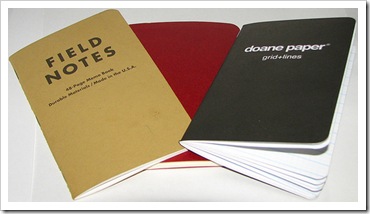 That’s right. The ever handy notepad is what I’m reviewing today.

Why? Because it’s the most reliable note-taking technology I know.  I admit it has its down side too, but hear me out.

I often find that in meetings I prefer to take a standard or college ruled notepad in addition to my notebook computer.  I specifically like spiral notepads, but also use thread-bound.  It’s old-school, true.  However, there are a lot of advantages to the notepad.  For one, I’m not distracted by emails, IM’s, my calendar or various other applications that would be readily available on a notebook computer that’s also used to take notes.  Nevertheless, take the notebook to your meetings, but keep it in sleep mode until you need one of those other apps.

You say, “but you can take faster notes on a notebook computer,” to which I respond that though I’ve used tablets with stylus-based technology, nothing but touch-screen will ever compete with notepad note-taking.  (This’ll likely change with the advent of touch-screen, especially evident in software like Microsoft Windows 7. ) Take drawings for example.  I can quickly draw out a table, a shape, Arabic characters or what not on a notepad, but I’d need special software, accurate pointing devices, specialized character set, just to name a few technologies and tools, in order to do this on a computer.

Also, If I’m sitting in a meeting with a notepad, I’m focused on the conversation not on a hundred other things I could do on my notebook computer.

Lastly, there’s something about the feel of pen and paper that helps me remember what I wrote substantially better and for a longer time than typing it.  It’s the physical memory that helps me retain concepts.

I admit, there are drawbacks.  I can’t email out my notes until I transcribe them into a document on my computer.  Also, I can potentially loose my notebook with all of my notes.  There’s no redundancy nor duplication of gathered data.  However, I’ve yet to loose a notepad.  In fact, I still have my notes from work from ten years ago, but I’ve lost countless files on a computer, thanks to hard drive crashes and lack of backups, file format change, and just plain forgetting where I saved a file.

So, I suggest giving the notepad a try.  See how this millennia-old technology still packs a punch.  If you really want to write in style, give the Moleskin a try.  This is one of my favorite brands that I even carry in my pocket.

I’d love to read your comments about use of notepads.  Feel free to post your reactions below in the Comments section.