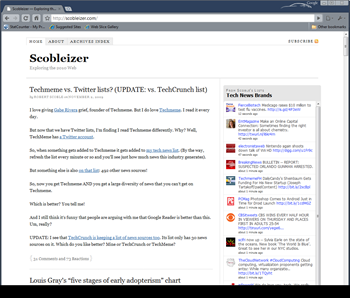 As you’ve likely noticed, I’ve been reading a lot about social networking and media recently.  I’ve certainly written enough about it.  This is all a result of reading blogs by Chris Brogan, Guy Kawasaki,  and Ryon Harms, among others.

These are all wonderful writers with a keen understanding on social media.  I’ve certainly learned a lot from reading their posts.

I’ve also come across some blogs that are a repetition of their ideas. Some may have a slightly different perspective, but they’re not really adding a whole lot to the conversation. (Admittedly, I may fall under that latter group from time to time.)

I found it refreshing to read a technically inclined perspective on social media recently, namely Robert Scoble’s.  In case you don’t know who’s Robert Scoble, here’s the opening description for him on Wikipedia (external link to his Wikipedia article):

I don’t know how many people you know that have a Wikipedia page dedicated to them, but I was impressed with this fact alone.

His blog is the Scobleizer (snapshot at the top of this page).  What I like about his blog, aside from his candid opinion and lucid writing style, is that it’s more technically inclined.  He’s certainly not afraid of stating his opinion, but he does it diplomatically, looking at the ideas presented.  He doesn’t attach anyone for their ideas.

In one of his more recent posts he went head-to-head with Chris Brogan in the post Twitter’s lists make Chris Brogan feel bad, insisting that the use of Lists on Twitter made perfect sense.  He sees lists as a way to better group people and discriminate against those that really didn’t belong on the list.  The example he gives that I like is being included in the “list of golfing greats” when I’m not a golfer. In my case, I just started golfing and posting articles about it on The Golf Student blog, but I certainly don’t belong on a list of golfing greats.  In fact, if you believe Robert’s line of thinking, I’d likely devalue the whole conversation on such a list.

Another point that impressed me most about Robert’s blog was, given he gets so many comments on each post, he replies back to every one.  He certainly exemplifies how all of us as blogger should have conversations on our sites, not just use them as our personal soapboxes.

Have you read the Scobleizer? What do you think of it?  Feel free to comment below and I too will take Robert’s lead and reply back to your comments.